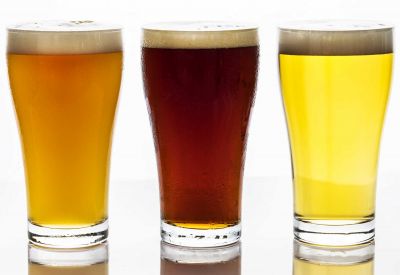 We have been running two Real Ale Trains (RATS) a year since 2017 and have featured 36 beers from twelve different local breweries. The trains are usually steam hauled and the beers are served on the train. We run two RATS a year on a Saturday in May and October. Its great fun with excellent beer, good company, on a vintage steam train on an iconic railway.

There are usually two sessions each RAT day, the first will start at Midday with the first train departing at 1 pm with the bar closing at 4 pm. This will allow passengers to see the line in daylight while enjoying excellent ales and company. The early finish also allows visitors to make use of public transport in the locality. Trains will run approximately every 55 minutes at each session. This will give plenty of time to stretch your legs and to use the station facilities. The toilets are located on the Down Platform but please note that there no usable toilets on the train.

The second session commences at 6 pm with the first train at 7 pm, with frequent trips up and down the line before the bar closes at 10 pm. It will also be a rare chance to experience the recently restored signal and station lighting which will add to an evening of nostalgic and atmospheric railway travel. Admittance for over 18s only will be by ticket available from the station in Silver Street on Sundays and Mondays from 1 pm, online from the railway's website, and from the Redan Inn at Chilcompton. Tickets cost £12 per session and include all train rides, a souvenir glass, your first pint of beer, and a programme containing tasting notes. More beer can be purchased at £1.50 per half-pint using vouchers available in the serving area on the train.

Public transport is available via the 172 Bath to Wells bus and the 424 Frome to Midsomer Norton bus. There are also other services between Bath and Midsomer Norton. Remember to alight at Norton Hill School which is the nearest bus stop to the station. Pumpkins on the Platform