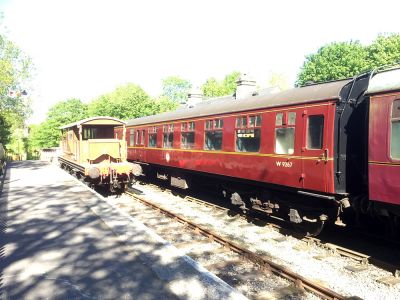 Preserved in 1973 by the North Yorkshire Moors Railway. Main line certified (for Whitby operation); delivered to Midsomer Norton in May 2017 on a three year loan from NYMR.

This is historically significant because this is the last remaining Mk1 carriage in the consist of the last special excursion train to run over ran over the S&D and into Bath Green Park on Sunday 6th March 1966 hauled by LMS 8F 48706 and BR Std.4 80043.

When withdrawn by in 1973 it was painted in BR’s corporate blue/grey livery and carried this throughout its time at the NYMR along with an ‘E’ prefix to its fleet number applied when it was transferred from the Western to Eastern Region in mid-1969.

Permission was sought from and was granted by the NYMR to repaint the carriage in BR Maroon and to reapply its ‘W’ prefix as this was the condition the vehicle was in when it was in that last train.