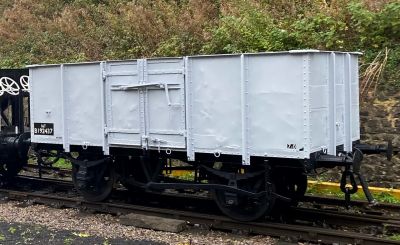 This 16T  Mineral Wagon was built by Metro Cammell in 1946 to diagram 1/112 in Lot number 2286 for French Railway operator SNCF. After a number of years operating in France it was re-imported and amalgamated into the British Railways wagon fleet.

It was acquired by the Trust as wagons of this type represents those that were seen on the S&D for decades marshalled in trains with the ubiquitous BR mineral wagons, moving coal from the Somerset coalfields including nearby Norton Hill colliery.

It was kindly donated by the National Railway Museum in 2021 and moved to Midsomer Norton the same year.

It is in good condition but has received treatment to the body sides with rust treatment and repainted. Within days of its arrival. It is through piped but is not fitted with vacuum brakes. The primary aim with this vehicle is to use it in demonstration freight trains including photo charters.

It is now owned by the Somerset & Dorset Railway Heritage Trust.