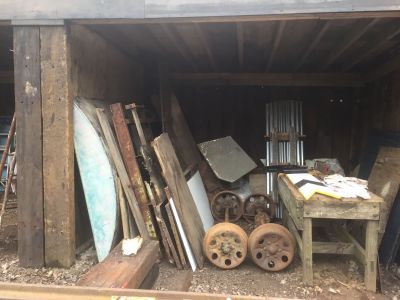 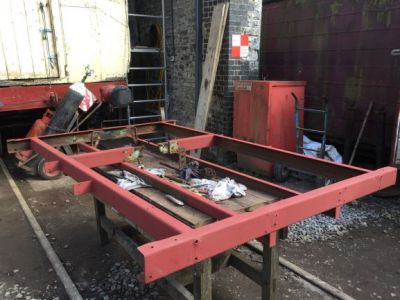 Our Wickham Trolley arrived in flat pack form.  In a remarkably short space of time, as the pictures above show, volunteers from our Engineering Department have transformed it into a beautifully restored vehicle.  It now has a trailer which is very useful for our Track Gang.

Not only that, The Wickham has been passed to give fare paying passenger rides in the station yard area and this has proved to be very popular with our visitors.

And if you would really like a Wickham Trolley of your own, but do not have the space or the budget for a full size one, we have a OO Gauge model for sale in the station shop.

See below for more historic and technical details of this delightful little vehicle.

It has carried the following running numbers:

Described by the manufacturers Wickham of Ware in Hertfordshire ‘ The Type 27A provides comfortable and fast transport for officials and engineers, whilst the excellent forward view and four speed gearbox make it ideal for its primary task of track inspection’. When outshopped from the works it carried BR maroon but certainly by the time it was renumbered TR18 it had been repainted yellow possibly during the 1970’s when this colour came into vogue with on track plant.

The Type 27A Wickham was no stranger to the S&D, indeed the last railway vehicle to be removed from Evercreech Junction was once of these trolleys.

After many years service with BR it was sold from Bangor to the Narrow Gauge Railway Centre of North Wales, Gloddfa Ganol, Blaenau Ffestiniog – August 1986.

It and another Wickham Trolley, works No. 7505 were stored at a Concrete Works in Nuneaton.

In late 2011 B40W was bought by a gentleman in Dorset and moved there, but was essentially used as a source of spares for another Type 27A that he was restoring.

In 2016 a group of working volunteers clubbed together to purchase the dismantled remains of B40W and it arrived at Midsomer Norton.

Restoration was fitted in around other restoration projects but 2019 saw B40W return to traffic and now looks resplendent in its 1950’s BR condition.