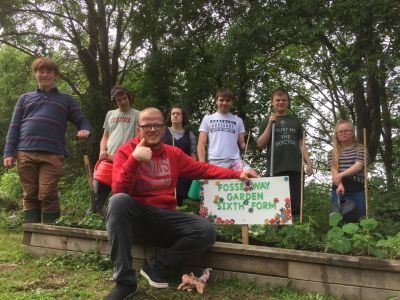 Fosseway Students Grow their own at Midsomer Norton Station

Form 5EJ at Fosse Way school have been helping Volunteers at the Heritage Railway with various activities including some major gardening plans. Over the summer work has been going on to clear the sand from the Andersen shelter, which has been used to help extend the front border at the station, and the Dig for Victory bed has been cleared for replanting. In addition a raised bed donated by Sentinel steam loco owner Andy Chapman and his wife Michelle has been filled with topsoil.

The students have grown their own plants at school and brought them over to the station for planting and now there are sturdy plants growing in both the raised bed and the Dig for Victory bed.

Station Volunteer John Marriott who is liaison officer and Gardener Gail Coleshill have been impressed with the efforts made by the Fosse Way students and the resultant garden areas.

John said “They have worked so hard under the guidance of their leaders and the results are impressive. The Heritage Railway is very pleased at the improvements that have been made to the gardens at the station.

Gail Coleshill says that visitors would be very welcome to see the gardens and all the other things of interest at the the station at the next event on the 28th July when Joyce the steam locomotive will be pulling trains. There is also a Family Fun Day on August 11thwhen trains will again be running.

Photo shows from the left Jamie, Jimmy, Phoebe, Ewan, Jude and Gina with Nick at the front.