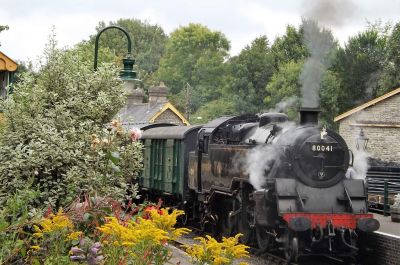 The Standard 4 Locomotive has been restored by the Standard 4 Project based at the Llangollen Railway on the river Dee. It was the last of the 14 class members to leave Barry in 1988 and was fully restored by 2009. It has been renumbered for its sojourn at the Somerset and Dorset Heritage Railway at Midsomer Norton to re-create the last train on the Somerset and Dorset line.

Volunteers have been working hard at the station restoring the British Second Class corridor coaches to take passengers, one of which has been adapted to take passengers with a disability. Passengers and their Care Support staff were delighted to be able to travel in their wheelchairs on the train this weekend with the help of station staff and specially adapted ramps.

Trustee and Fireman Stephen Lacey has been very encouraged by the enthusiasm of visitors. He said
"Last weekend we had a very steady flow of passengers, and another first was achieved where we were able to provide access for disabled visitors in the refurbished section of the Brake Coach. A review was left by one of the Support Care Staff on our Facebook page and it shows huge gratification to our staff and volunteers during the visit."

The locomotive was renumbered 80041 and carried a wreath as a tribute to ex S&D driver Ian Bunnett who died this week, as that was his favourite engine. Other ex S&D members were also visiting the station this last weekend. Included in the special guests were Chairman of B&NES Council Alan Hale and MP Jacob Rees Mogg and his family. The last train of the day was a recreation of the last train on the line in 1966.

There will be parking at Norton Hill School on the Saturdays, otherwise visitors can use the town car parks. The vintage buses will be available for 'park and ride' from town car parks and the Green Goddess Fire Engine will also be on site. The station buildings and shop, museum, gardens and buffet car will be open for visitors to make a day of it and finish up with a ride on the train.

Tickets are priced as follows:

If you would like to become a volunteer at the station come and see us at one of the events or send an e mail to [email protected] or phone 01761 411221 on a Monday or Sunday.