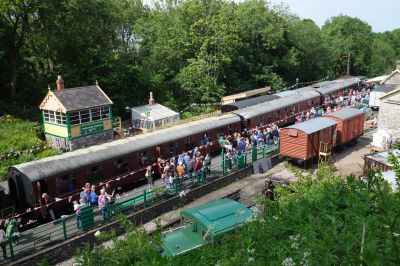 On Saturday, June 4th the railway hosted an extremely well-attended party to celebrate the Queen's Platinum Jubilee. The event was run in conjunction with Midsomer Norton Town Council who also provided financial support. From midday free train rides ran regularly until 8pm hauled by visiting steam loco Austin 1 and these were very popular. Despite a somewhat downbeat forecast the weather was very kind to us and the afternoon & early evening in particular were very pleasant with the outside seating (beneath copious amounts of bunting) put to good use. Two vintage buses provided transport to and from the site which were also well used throughout the day.

Beer & cider from Box Steam Brewery was available at the "Queen's Head" bar which had taken over one end of our book Emporium. A special ale for the occasion called "Royal Box" was on offer and we understand it was very good.

At 5pm a celebratory beacon was lit near the pill box museum to further mark the occasion.

A very big thank you to everyone who helped make this event such a fantastic success and to all the visitors who supported it.