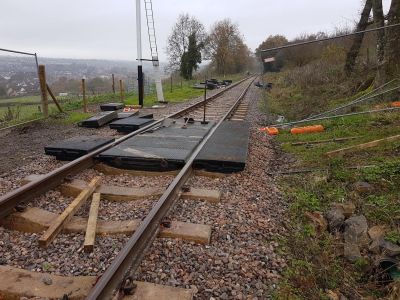 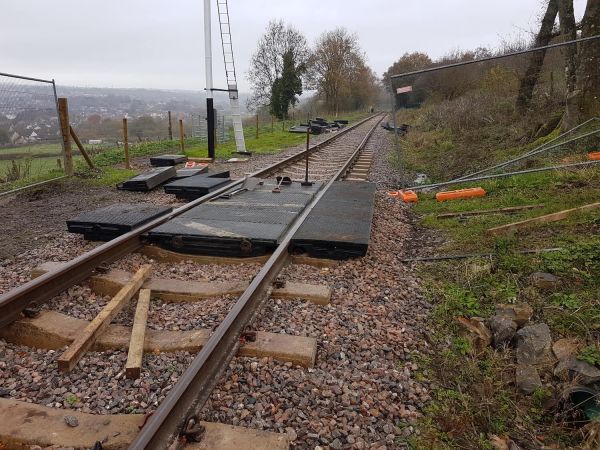 The second working weekend came to a close on Sunday evening with good progress made on the extension. Those regular volunteers on site also made some new friends and introduced them to the railway's aims and future aspirations and hopefully we will see them here again in the very near future.

Weather over the two days was generally good and the normal Sunday crew was bolstered by a number of graduate railway engineers from Mott MacDonald Consultant's led by Dr Joe Cosgrave. We were also joined by two operations managers from the RAF Museum at Discord and the Ironbridge Gorge museum. Approximately 24 people on site on both days.

The volunteers were split into a number of groups, the railway engineers having an opportunity to gain some 'hands on' experience of track laying and the regular track gang members benefitting  from having a number of very able bodied and enthusiastic visitors to assist with the heavy manual tasks of positioning sleepers and other materials.

Sleeper work concentrated on accurately spacing out and aligning the concrete sleepers which had been randomly spread out the previous weekend with the assistance of Penny's. Another team concentrated on sawing and drilling rail, whilst another team concentrated on getting some of the Strall crossing mats laid in place and building the Hunt Crossing. On the Sunday some site clearance was undertaken with a fire lit to clear some of the cutdown branches from when Penny's had regraded the site the previous week. Other work included a small amount of packing and general tidying of the rail formation north of the Hunt Crossing.

On one hand it could be said that our original aspiration of laying all the sleepers and track was a 'bridge too far' in the time we had available over the two weekends. There is no doubt though that by laying out all the F27 concrete sleepers on the formation,  that this will enable the rapid laying of cut and drilled rail over the coming weeks. With sufficient numbers on site over the coming Sundays we should be close to the infill by Christmas.

The Hunt Crossing requires some further work to complete the approaches to it from the sides, but already looks a very professional piece of work and once the gates are in place will be another useful addition to the railway infrastructure and provide walkers with a safe place to cross the line.

The two weekend's did prove the benefit of having extra personnel on site, allowing a number of tasks to be conducted in parallel. However it also highlighted that to gain the maximum benefit from those on site requires more thorough planning and supervision of some of the less experienced volunteers.

Looking ahead the plan is to arrange further working weekends early in the New Year, when hopefully we will see some of our new friends returning to site to assist with the work of jacking and packing the newly laid panels in readiness for a planned Easter opening of the running line.

In order to do so, we do need your help, there is still much to do with fencing of the track formation, gates for the Hunt Crossing to be installed  and many other jobs to be completed before the line can be opened.  Once plans are in place, dates for the 2018 weekends will be announced on the website, please check back regularly for news of progress on the extension and other updates of other work being undertaken by our volunteers.