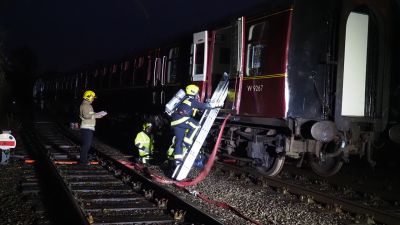 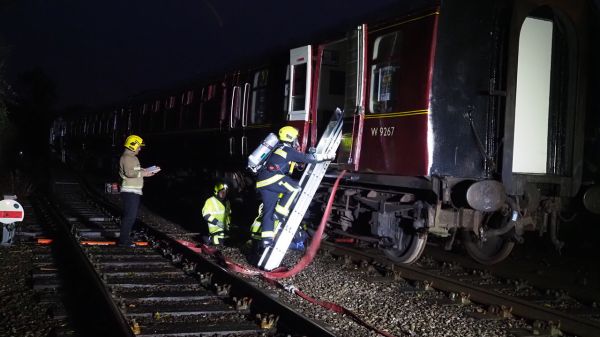 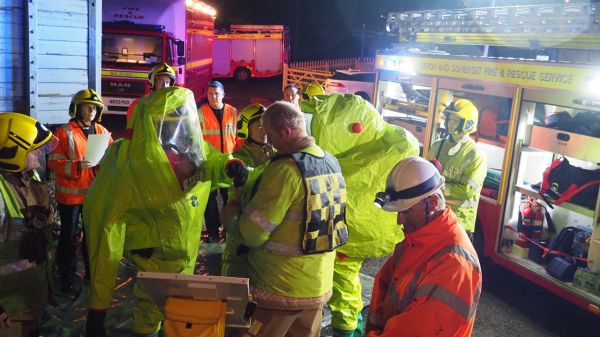 On the evening of Monday 23rd September, railway member working very closely with operational crews from both Avon Fire & Rescue Service and Devon & Somerset Fire & Rescue Service staged a major training exercise for the emergency services. This exercise 'Train Wreck' involved a simulated scenario of a train on fire, which also involved hazardous materials and a number of casualties requiring rescue.

One of our members, Graham Jackson, himself a former fire service officer had worked closely with the emergency services to set up this exercise that resulted in several several fire engines and their crews from both Avon and Devon & Somerset FRSs attending the station at Midsomer Norton in order to gain access along the platform to the location of the simulated train fire. This proved to be a very worthwhile training exercise for all the crews involved, the exercise being held in realistic conditions and crews faced with a number of hazards and also requiring casualties to be rescued / led to safety.

The training exercise proved to be a fantastic public relations exercise for the railway, once again proving the value of the Somerset & Dorset heritage railway to the local and wider community and how we can work with numerous other organisations for the mutual benefit of both parties.